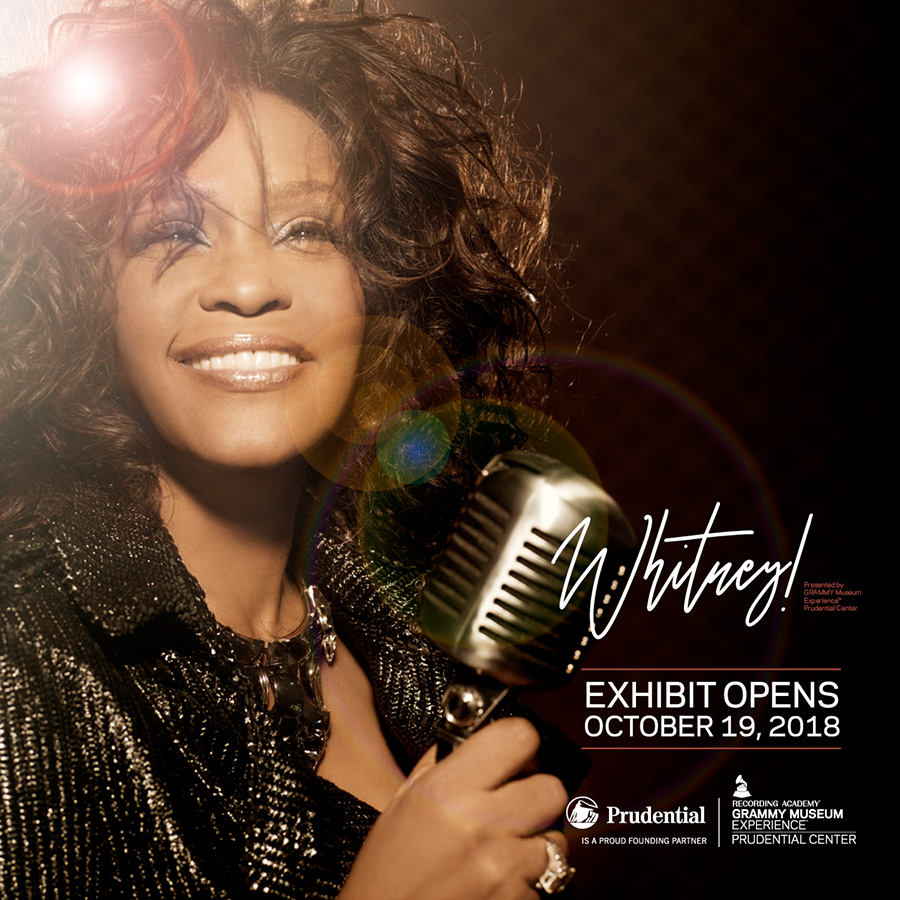 Whitney! Explores The Musical Legacy of Newark’s Own Whitney Houston

The GRAMMY Museum ExperienceTM Prudential Center announced plans for their latest temporary exhibit Whitney!, a major museum exhibition exploring the iconic career of Whitney Houston. Set to open on the one-year anniversary of the Experience, the exhibit will make its East Coast debut on October 19, 2018 in the six-time GRAMMY® Award winner’s hometown of Newark and remain open to the public until June 30, 2019.

Curated by the GRAMMY Museum® in Los Angeles and the Estate of Whitney E. Houston, Whitney! gives fans an intimate look into all aspects of Houston’s remarkable life, bringing together a collection of diverse artifacts, rare photographs and footage from the private collection of the Houston Family.

“Whitney Houston’s dynamic and illustrious career remains one of the most decorated in music history and her connection and impact on the city of Newark will forever be celebrated,” said Hugh Weber, President of Harris Blitzer Sports and Entertainment, which includes in its portfolio the New Jersey Devils and Prudential Center, as well as The GRAMMY Museum Experience. “We are honored to be able to bring this extraordinary exhibit to Prudential Center and share it with her many fans both here and from around the world.”

Artifacts on view include stage costumes worn by Houston, scrapbooks from her early career and numerous awards and accolades Houston received throughout her career. Additionally, the GRAMMY Museum has also interviewed artists and musicians who have worked with her, or have been influenced by Houston, sharing their view on her gifted talents that have touched fans around the world.

The exhibit will feature never before seen artifacts including:

“The Estate of Whitney E. Houston is elated to partner with the GRAMMY Museum ExperienceTM Prudential Center this October to celebrate Newark’s own, Whitney Houston’s extraordinary career,” said Pat Houston, Executor of The Estate of Whitney E. Houston. “This experience gives the community and the world a first glance at her legacy by highlighting all aspects of her talent. We would like to thank the GRAMMY Museum team and Prudential Center for offering Whitney’s fans from around the world the opportunity to experience ‘The Voice’ in Newark: where it all started.”

“I’m honored that the Estate of Whitney Houston has chosen to work with us to create Whitney!,” said Bob Santelli, the GRAMMY Museum’s founding Executive Director. “As one of the greatest vocalists of our time, and a New Jersey native, we are particularly excited to showcase her long connection to the GRAMMY Awards show and to celebrate the musical genius that made her one of America’s most-awarded vocalists in her hometown.”

Houston has sold over 200 million combined albums, singles and videos internationally throughout her career with Arista Records. Houston is the only artist to chart seven consecutive #1 Billboard Hot 100 songs including “Saving All My Love For You,” “How Will I Know,” “Greatest Love Of All,” “I Wanna Dance With Somebody (Who Loves Me),” “Didn’t We Almost Have It All,” “So Emotional” and “Where Do Broken Hearts Go.” Houston was also the first woman to enter the Billboard 200 album chart at #1 with her second album, Whitney. In 2009, Guinness World Records cited her as the most awarded female act of all time releasing seven studio albums and two soundtrack albums all that have been certified diamond, multi-platinum, platinum or gold by the Recording Industry Association of America.

Tickets to visit the GRAMMY Museum ExperienceTM Prudential Center range from $7 to $10 and can be purchased through Ticketmaster.com. The Experience is open Tuesday through Sunday 11 a.m. to 6 p.m. on non-event days and 11 a.m. to 8 p.m. on event days.

ABOUT GRAMMY MUSEUM EXPERIENCE PRUDENTIAL CENTER
Built and operated by Prudential Center in Newark, N.J., the 8,200-square-foot GRAMMY Museum Experience is housed within the Prudential Center, an state-of-the art facility that hosts approximately 200 sports and entertainment events per year. The Experience marks the first GRAMMY Museum outpost to be built on the East Coast and, similar to the original GRAMMY Museum in Los Angeles, the Experience is dedicated to exploring the past, present and future of music, and the cultural context from which it emerges, while casting a focused spotlight on the deep musical roots of New Jersey. The Experience features a dynamic combination of educational programming and interactive permanent and traveling exhibits, including a spotlight on legendary GRAMMY winners from New Jersey. For more information about GRAMMY Museum Experience Prudential Center, visit www.grammymuseumexp.org.