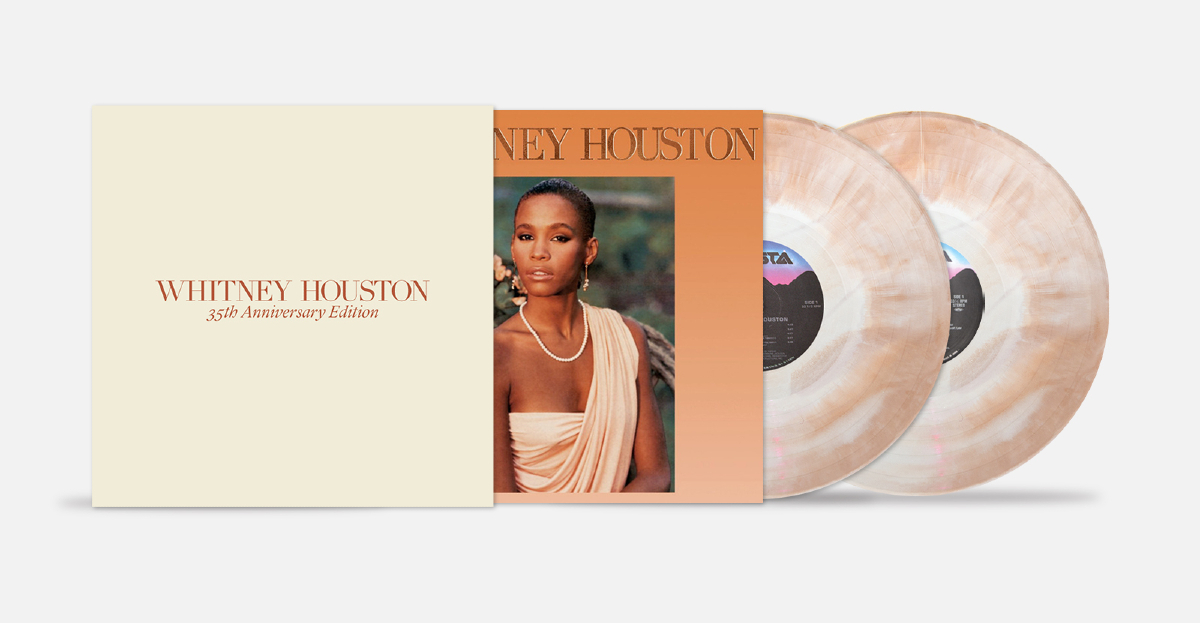 Legacy Recordings, the catalog division of Sony Music Entertainment, and Vinyl Me, Please are celebrating the 35th anniversary of Whitney Houston, the seminal album that launched the American music icon’s superstar career, with the release of a commemorative 2LP 12″ vinyl collector’s edition. Available for preorder here: https://WhitneyHouston.lnk.to/WH35AnniversaryIN/vinylmeplease

The 2LP deluxe vinyl package produced by Vinyl Me, Please includes heavyweight color vinyl and a premium gatefold jacket, housed in a foil-stamped slim case box. The 180-gram peaches and cream swirl color vinyl set features the original album alongside the first U.S. release of Whitney Dancin’ Special. This collection, released only in Japan in 1986, features extended remixes of “How Will I Know,” “You Give Good Love,” “Thinking About You,” “Someone For Me” and an instrumental version of “How Will I Know.” The anniversary edition also includes a 40-page hard cover photo and lyric book with new essays from Pat Houston, Narada Michael Walden, LaLa and others who collaborated with Whitney on the album. Tracks from Dancin’ Special will be released digitally worldwide for the first time to coincide with the release of the 2LP 12” vinyl product.

With Valentine’s Day 2020 marking the 35th anniversary of the release of Whitney Houston (February 14, 1985), a newly remastered 4K version of the “Greatest Love of All” music video will also be available today. https://WhitneyHouston.lnk.to/GLOA4K

The celebration of the life and music of Whitney Houston will continue through 2020 and beyond. The Estate of Whitney E. Houston and BASE Hologram recently announced An Evening With Whitney: The Whitney Houston Hologram Tour, an iconic and awe-inspiring mixed media performance launching in late February 2020 with stops planned across the UK, Europe, Mexico, and North America.

Whitney Houston’s self-titled debut album was released by Arista Records on February 14, 1985 and entered the Billboard Top Albums chart at #166 the week of March 30, 1985. With the success of the first single “You Give Good Love”, the album began climbing the charts, reaching #1 Billboard‘s Top R&B/Hip-Hop Albums chart in June and breaking into the Top 10 of the Billboard 200 in August 1985. Whitney Houston took 55 weeks to hit #1, but once there, spent 14 non-consecutive weeks in the top slot, one of the longest-running #1’s in Billboard chart history. The album remained comfortably positioned on the Billboard 200 for 162 weeks, 46 of those in the Top 10. Whitney Houston was the top-selling album of 1986 in the United States and the first album by a female artist to earn Billboard‘s #1 Album of the Year (1986). The album was certified Diamond on March 16, 1999 and awarded 13x platinum status on July 29, 1999.

The 28th GRAMMY Awards saw Whitney win her first GRAMMY: Best Pop Vocal Performance, Female for “Saving All My Love for You.” Her performance of the song during the GRAMMY telecast later earned her an Emmy Award for Outstanding Individual Performance in a Variety or Music Program. In 2013, Whitney Houston was inducted into the GRAMMY Hall of Fame, established by the Recording Academy’s National Trustees in 1973 to honor recordings of lasting qualitative or historical significance that are at least 25 years old.

Whitney Houston has been cited as the most awarded female artist of all time by Guinness World Records and remains one of the best-selling music artists of all time with 200 million records sold worldwide.