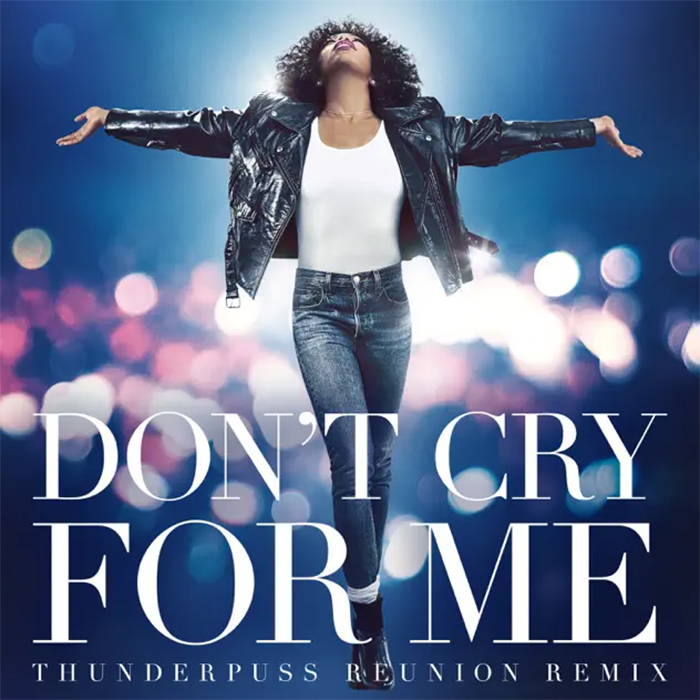 RCA Records announced “Don’t Cry For Me” Thunderpuss Reunion Remix – a prelude to an upcoming remix package complementing I Wanna Dance With Somebody (The Movie: Whitney New, Classic and Reimagined). Thunderpuss, pioneers of the American dance movement, reunited to recreate Houston’s incandescent 1994 live performance of “Don’t Cry For Me” in a special remixed version available on January 18th.

One of the most sought-after remixers for their distinctive style, the production duo first gave Houston an international dance hit with their remix of, “It’s Not Right But It’s Okay” – a version that would take clubs by storm and become an iconic anthem on the worldwide dance scene. Now, nearly twenty years later, Thunderpuss is reuniting for the first time since 2003 to add to the treasured legacy of one of the greatest voices in music history.

“I’m deeply honored and humbled to be ‘invited to the party’ to, once again, contribute to the incredible legacy of the one and only diva, Whitney Houston,” said Thunderpuss member, Barry Harris. “From the moment I first heard the a cappella of ‘Don’t Cry For Me,’ I knew in my heart this was a really special performance and perfect for the movie I Wanna Dance With Somebody. I truly feel this is a magical record, and I was thrilled to do a Thunderpuss production for her. We will always love you, Whitney! It was great fun working with Chris again, with a lot of laughs along the way, and reminded me of why we became good friends back in the early 90’s.”

The producing team of Barry Harris and Chris Cox set the ‘90s ablaze by remixing some of the most iconic divas in the industry including Madonna, Britney, and Cher – but it was their unbeatable remix of “It’s Not Right But It’s Okay” that captured Houston’s iconic style in a way that would solidify their presence as dance music pioneers.

“Whitney is not only a beloved artist around the world, but she is one of the most important artists in my life,” said Chris Cox of Thunderpuss. “Our work with Whitney was a transformative cornerstone of my career, and consequently, the music we’ve made with her has connected with so many people. She is not only an entertainment legend, but also a groundbreaking icon. To be reunited and working with Barry was a moment I never imagined would happen again, but it has been an extraordinary experience as we conjured up the Thunderpuss magic, while also pushing forward in new directions. I am grateful and excited to be involved with a project that was technically hard and musically challenging, but also so emotionally gratifying!”

Listen to the “Don’t Cry For Me” Thunderpuss Reunion Remix here.

‘I Wanna Dance with Somebody’ Movie Soundtrack Out Now!

‘I Wanna Dance with Somebody’ Now Playing In Theaters!

‘I Wanna Dance with Somebody’ Official Movie Trailer 2

‘I Wanna Dance with Somebody’ Official Movie Trailer

‘I Wanna Dance with Somebody’ Movie Poster