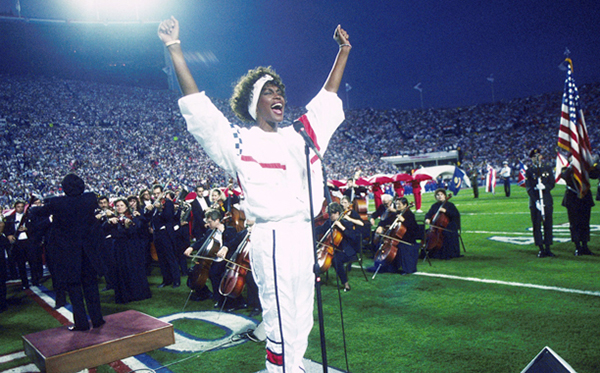 Congratulations to Lady Gaga on her performance of “The Star Spangled Banner” at Super Bowl 50. When asked about her favorite version, she told the NFL Network, “For me, it was Whitney Houston. When I was little, I used to stand at the top of my staircase and sing along with her version.”

Gary Houston recently spoke with Entertainment Weekly about Whitney’s iconic performance, which peaked at #6 on the Hot 100, topped the U.S. sales charts, was certified Platinum by the RIAA, and raised more then $1 million for both Gulf War veterans in 1991 and New York police and firefighters after the September 11, 2001 attacks.

He said, “She did everything she could do to prepare for her voice, to have it at top notch. She swam, she worked out, she played tennis. And she always rehearsed. Even when she wasn’t on stage, she was always singing. A lot of people knew she was going to perform — but they didn’t expect her to bring that. … She never believed things were happening to her at that magnitude. And she was just really excited and elated. And just kind of shocked that people reacted the way they did.”