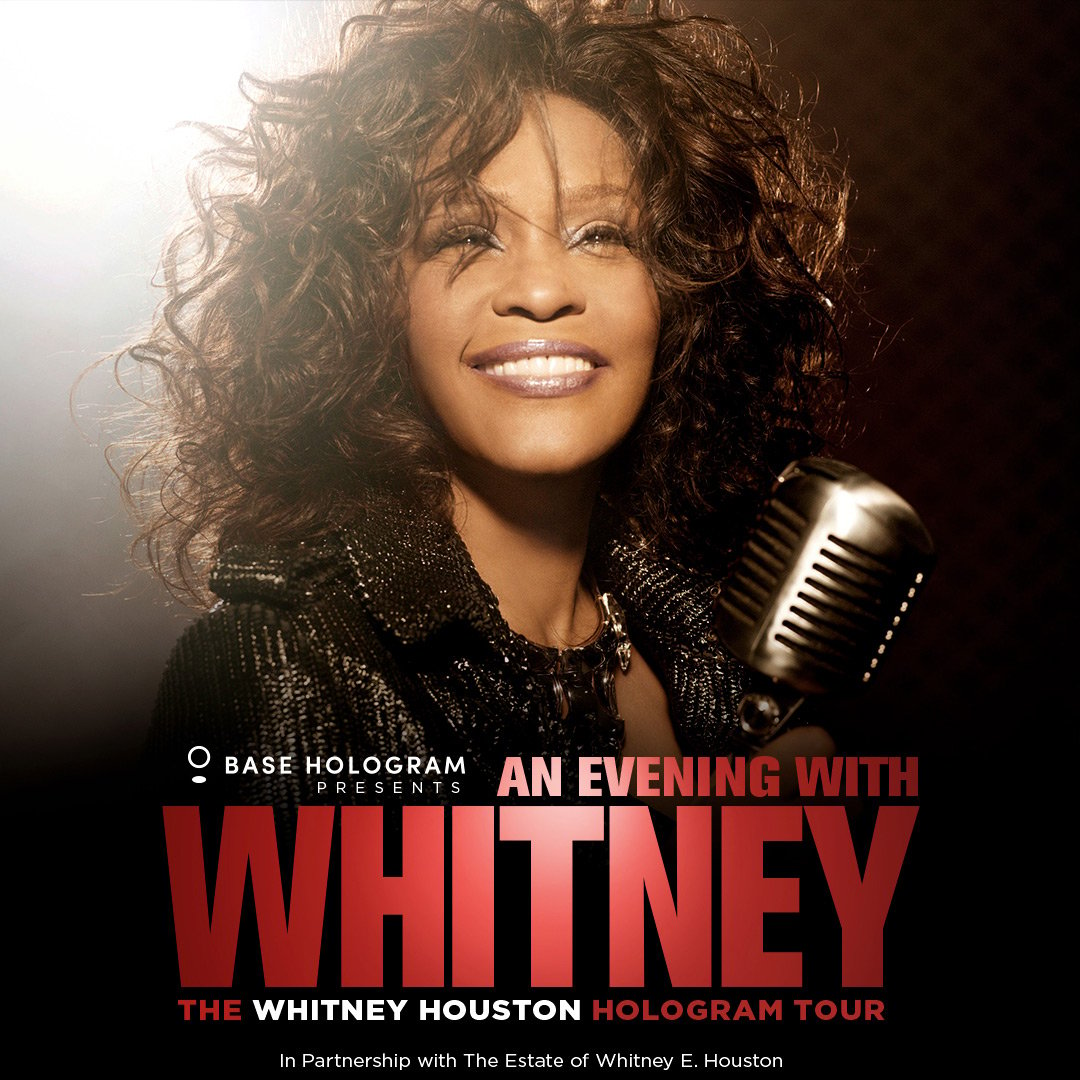 The Estate of Whitney E. Houston and BASE Hologram are pleased to announce An Evening With Whitney: The Whitney Houston Hologram Tour! Don’t miss this iconic and awe-inspiring mixed media performance kicking off in Sheffield in late February 2020. The UK & IRL tour will expand throughout the globe with stops planned across Europe and North America into 2020!

An Evening With Whitney: The Whitney Houston Hologram Tour is an iconic and awe-inspiring live theatrical performance that celebrates Whitney’s incredible life, work, and the everlasting legacy of the most awarded female artist of all time! This one-of-a-kind holographic experience will reunite audiences with the beloved Queen of Pop using state of the art technology and digitally remastered arrangements of her classic hits – backed by a live band, singers, dancers – all surrounded by a spectacular and cutting-edge stage and lighting extravaganza to create a truly breathtaking concert experience.

Tickets are on sale at www.aneveningwithwhitney.com.

Today, BASE Hologram, the leading live event producer of cutting edge holographic live entertainment tours and attractions worldwide, announced in partnership with The Estate of Whitney E. Houston the first dates of the upcoming hologram touring production An Evening With Whitney: The Whitney Houston Hologram Tour.

Kicking off in Europe ahead of its North American debut in the fall of 2020, the show will include all of the singer’s iconic hits including “I Will Always Love You,” “I Wanna Dance with Somebody (Who Loves Me),” “Greatest Love of All” and “Higher Love.”

“Whitney Houston was a talent beyond words, and her influence and artistry transcended all boundaries,” said Brian Becker, Chairman & CEO, BASE Entertainment and BASE Hologram. “What we are creating here is a new type of theatrical concert experience designed to capture that magic. When she performed there was an unmatched level of charisma and emotion to it – that’s what we are going to bring to audiences and it’s an honor to be able to help add to her legacy with this project.”

Presented through state-of-the-art proprietary holographic technology and combined with unmatched Broadway theatrical stagecraft, a live band, back-up singers and dancers set to digitally remastered arrangements of her classic songs, the production will be helmed by acclaimed choreographer Fatima Robinson (“Dreamgirls,” “The Academy Awards”). Named one of Entertainment Weekly’s “100 Most Creative People in Entertainment,” Robinson is known for her work choreographing massive events and directing multiple award-winning music videos working with such names as Rihanna, Kanye West, and Mary J. Blige.

“A hologram show is all about the imagination and creating a “wow factor” that extends to an incredible experience to enjoy for years to come,” said Pat Houston, Whitney’s former Manager and President and CEO of The Estate of Whitney E. Houston. “Whitney is not with us but her music will live with us forever. We know we made the right decision partnering with BASE because they understand how important it is to produce a phenomenal hologram. They also know that engaging her fans with an authentic Whitney experience would resonate worldwide because of the iconic status that she created over three decades. Her fans deserve nothing less because she gave nothing less than her best.”

The only artist to chart seven consecutive #1 Billboard Hot 100 hits, the first female artist to enter the Billboard 200 Albums chart at #1 and the only artist with eight consecutive multi-platinum albums, Whitney Houston redefined what it meant to be an iconic superstar. Certified by the Guinness World Records as “the most awarded female artist of all time” with over 400 awards including 6 GRAMMYS, 22 American Music Awards, 16 Billboard Music Awards, two Emmy nominations and one win, Houston also had success on the big screen with starring roles in The Bodyguard, Waiting To Exhale and The Preacher’s Wife.

“Whitney was a musical trail-blazer and I’m extremely honored to have this opportunity to help craft this show in her honor,” said Fatima Robinson. “I always enjoyed watching this magnificent woman and voice on stage and to be able to play a role in recreating that and helping others have those same emotions and experience is special.”

“There is a reason why it is so hard to cover a Whitney Houston track, she really was one-of-a-kind,” said Marty Tudor, BASE Hologram CEO of Production. “What we are doing with this tour is to celebrate her incredible life and to do that we have to get every detail right. It would be a disservice to her, her family and her fans if we weren’t anything other 100% authentic. We are privileged to have been entrusted with this responsibility and hope audiences are able to come, enjoy and get lost in the music of the industry’s most talented performers.”

An Evening With Whitney: The Whitney Houston Hologram Tour will join BASE Hologram’s current touring shows Roy Orbison & Buddy Holly: The Rock ‘N’ Roll Dream Tour and Callas in Concert. Additional information including creative information and dates will be available in the coming months at www.basehologram.com.

AN EVENING WITH WHITNEY: THE WHITNEY HOUSTON HOLOGRAM TOUR DATES:

Note all dates are subject to change. Please check the website for the most updated information as new locations are announced.