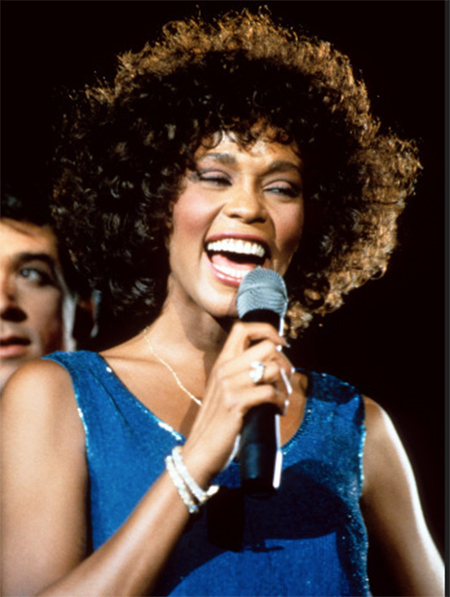 Altitude Film Sales is introducing the project to buyers at Cannes with UK rights acquired by Altitude Film Distribution. Will Clarke, Andy Mayson and Mike Runagall will executive produce.

While this is the first documentary to be officially authorized by the estate since Whitney’s death, Kevin Macdonald and the producers have been given the estate’s blessing to tell the unvarnished and authentic story of the singer’s life in a film that will examine both the highs and lows of her dramatic career.

Kevin Macdonald will also be interviewing Clive Davis, founder and president of Arista Records, currently chief creative officer of Sony Music Entertainment and who is universally acknowledged for bringing Whitney Houston to prominence.

Often referred to simply as ‘The Voice’, Whitney Houston was a singular talent, blessed with an extraordinary vocal range and incredible technical skill. As one of music’s biggest selling artists ever, she broke more records than any other female singer in the history of pop music.

With over 200 million album sales worldwide, and remaining the only artist to chart seven consecutive US No. 1’s, Whitney Houston became the voice of a generation. Coming from an esteemed lineage of singers, Whitney was destined to be plucked from her gospel-singing roots to rule the world stage. She inspired a generation of singers from Mariah Carey and Lady Gaga to Beyoncé and her unforgettable performance of ‘The Star-Spangled Banner’ moved the nation.

But all these achievements have become overshadowed by a story of addiction and self-destruction. With unprecedented access to friends, family and collaborators – some of whom have never told their side of the story, Kevin Macdonald’s feature documentary will for the first time tell the complete story of Whitney Houston’s life and work from the point of view of those who knew her best. The film will reveal a woman who was both blessed and cursed with perhaps the greatest natural ability of any pop star in history.

Filmmaker Kevin Macdonald says, “The story that is never told about Whitney is just how brilliant she was as an artist; by many measures she had the greatest voice of the last 50 years. She changed the way pop music was sung – bringing it back full circle to its blues and gospel roots. She was also completely unique in being a black pop star who transcended her race globally with her work sold in countries where black artists don’t sell.

“We have access to never-before-seen footage of Whitney that charts her whole life from her beginnings singing in her Church’s gospel choir, to the day of her tragic death at the age of 48 and three decades of her music including exclusive demo recordings, rare performances and audio archive. Although we won’t shy away from the darker parts of Whitney’s life – her descent into addiction – I want audiences to walk out of the cinema and feel positive about Whitney and her music. I want to reveal a woman that even her most die-hard fans never knew; and a woman those new to her life and music will never forget.”

Producer Simon Chinn adds, “My business partner Jonathan Chinn and I were thrilled when Lisa Erspamer brought this amazing project to us – and even more thrilled when Kevin Macdonald came on to direct. The opportunity to tell Whitney Houston’s story with full access to her music and those who knew her best was simply too good to pass up. By casting her story, her life choices and her work in a new light, we want to reassess the life and legacy of one of music’s biggest stars. Altitude Film Distribution, who are as passionate about the project as we are, are approaching the film as a major tent-pole release, and expect this to be one of 2017’s biggest cultural highlights.”

Will Clarke, Chairman and Co-CEO of Altitude Film Entertainment says, “Whitney’s story, brought to screen by Kevin Macdonald and this producing team, will make for a truly compelling theatrical event for audiences worldwide.”

The film will be released in the UK by Altitude Film Distribution, who released the Oscar® and BAFTA-winning AMY last year, which grossed a record-breaking £3.8 million at the UK box office.

Altitude Film Distribution has expanded its slate extensively over the two and half years since its launch. Last year it released the Oscar® and BAFTA™ award-winning feature documentary Amy which has not only met with critical acclaim for the filmmakers but has also been a huge success for Altitude grossing over £3.8 million at the UK box office. AFD has also released two more of last year’s most highly regarded feature documentary titles in the UK, Palio and My Nazi Legacy, both of which were nominated alongside Amy for Best Documentary at the 2016 Evening Standard Awards. Other releases have included Nick Read’s Bolshoi Babylon, Ira Sachs’ Love is Strange, Bharat Nalluri’s Spooks: The Greater Good and Oren Moverman’s Time Out Of Mind. Forthcoming releases include Jeremy Saulnier’s Green Room, Ira Sachs’ Little Men, Asif Kapadia’s Maradona, Race (Starring Stephan James, Jason Sudiekis and Jeremy Irons), Alone in Berlin (Starring Emma Thompson and Brendan Gleason) and The Odyssey (starring Lambert WIlson, Audrey Tautou and Pierre Niney).

Lightbox
Headquartered in London and Los Angeles, Lightbox is a multi-platform media company creating high quality non-fiction content for an array of distribution platforms. It was founded by two-time Academy Award-winning producer Simon Chinn (Man on Wire, Searching for Sugar Man) and Emmy-winning producer Jonathan Chinn (American High, 30 Days). Lightbox is currently in production on Captive, a major 8-part documentary series for Netflix about international hostage crises; LA92, a feature documentary on the 1992 LA riots for National Geographic Channels, directed by the Academy Award-winning filmmakers behind Undefeated; an exclusive access documentary series on British Vogue for BBC Two; The Traffickers, an 8-part series on global trafficking for Fusion; and other series for Channel 4, FX Productions, BBC and Red Bull Media. It has previously produced documentary series for Xbox Entertainment Studios, NBC Universal’s Esquire Network and recently produced Fantastic Lies for ESPN’s prestigious 30 for 30 strand, which was one of the network’s highest ever rated feature docs. Lightbox is closely aligned with Simon Chinn’s feature documentary label, Red Box Films. www.lightboxent.com

Lisa Erspamer Entertainment
Lisa Erspamer Entertainment is a Los Angeles based multi-media production and consulting company focused on scripted and non-scripted content. The company has brought its unique media and storytelling expertise to clients such as Starbucks, Sony Television, People Magazine, Pinterest, Apple and more. Founder Lisa Erspamer is known for her nearly 20 year collaboration with Harpo Productions, as chief creative officer and executive vice president of Programming and Development for The Oprah Winfrey Network (OWN) and executive producer of The Oprah Winfrey Show.

While there, she produced some of the show’s most memorable episodes, including the biggest flash mob in history, Oprah’s After Oscar® Specials and Whitney Houston’s final interview. While at OWN, Lisa executive produced the Primetime Emmy-nominated documentary, Running From Crazy about the Hemingway dynasty. In addition to the current Whitney documentary, Lisa has several other projects in production under the moniker Happy Street Entertainment, a company she co-founded, including a Faith Hill talk show hosted by Kellie Pickler and a documentary on legendary songwriter Diane Warren.