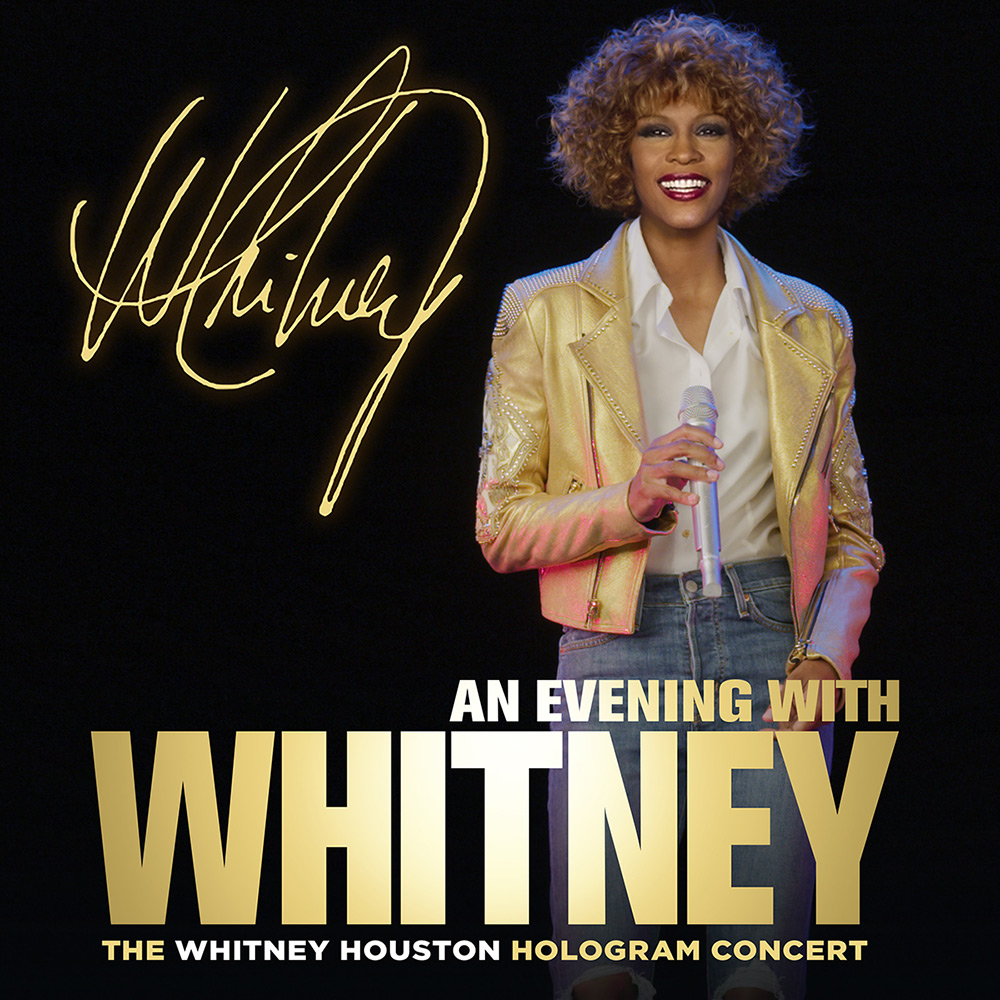 An Evening with Whitney: The Whitney Houston Hologram Concert, the awe-inspiring live theatrical concert celebrating the incredible music and everlasting legacy of Whitney Houston, makes its North American debut with an extended residency at Harrah’s Las Vegas this October. Be the first to book tickets to this boundary-breaking hologram concert with this exclusive pre-sale offer. Use code AEWW21.

The boundary-breaking hologram concert spectacle, AN EVENING WITH WHITNEY: THE WHITNEY HOUSTON HOLOGRAM CONCERT, featuring the voice of one of the world’s greatest entertainers virtually performing among a live band, backup singers and dancers while being surrounded by cinematic special effects will make its North American debut with an extended residency at Harrah’s Las Vegas starting Oct. 26, 2021. Tickets ranging from $49 to $89 plus applicable tax and fees will be available starting at 10 a.m. PT on Friday, July 23, online at WhitneyVegas.com, Ticketmaster.com, or by phone at 702.777.2782. An exclusive pre-sale for Caesars Rewards members and Whitney Houston fans is available now.

Produced and created by BASE Hologram in partnership with The Estate of Whitney E. Houston and in association with GFour Productions, AN EVENING WITH WHITNEY is presented through state-of-the-art, proprietary holographic technology that creates a “breathtakingly convincing hologram of the late, great American superstar,” (Telegraph UK). AN EVENING WITH WHITNEY takes audiences on a musical journey through Houston’s storied career using unmatched theatrical stagecraft paired with a live four-piece band, backup singers and dancers all set to digitally remastered arrangements of Whitney’s biggest hits and fan favorites, including “I Will Always Love You,” “I Wanna Dance with Somebody (Who Loves Me),” “The Greatest Love of All” and an on-your-feet cover of Steve Winwood’s “Higher Love.”

“In 2011, Whitney and I discussed her idea of an intimate, unplugged concert tour. It was a project we called ‘Whitney Unplugged’ or ‘An Evening with Whitney,” said Pat Houston, Whitney’s former Manager and President and CEO of The Estate of Whitney E. Houston. “While Whitney’s no longer with us, her voice and legacy will live on with us forever. AN EVENING WITH WHITNEY is another chance for us to relive and celebrate the talent that we were so lucky to receive for more than three decades and we’re excited to bring this cutting-edge musical experience to the fans who supported the pop culture phenomenon that was Whitney Houston, because they deserve nothing less.”

“Whitney Houston was a talent beyond words, and her influence and artistry transcended all boundaries,” said Brian Becker, Chairman & CEO, BASE Entertainment and BASE Hologram. “What we are creating here is a new theatrical concert experience designed to capture that magic. This collaboration of art, live entertainment and technology enables us all to celebrate and extend Whitney’s legacy with BASE Hologram providing audiences with the unique opportunity to experience her incredible art in a new and innovative way.”

“When she performed, there was an unmatched level of charisma and emotion to it. That’s what we’re bringing to audiences,” added Becker. “It’s an honor to be able to help add to her legacy with this project and present her incomparable talent in a way that will resonate with longtime fans and new generations alike. If you were lucky to see Whitney perform live, this is an opportunity to see her again. If you weren’t so lucky, this is the closest you may ever get to experiencing what it was like.”

AN EVENING WITH WHITNEY is helmed by acclaimed choreographer Fatima Robinson (“Dreamgirls,” “The Academy Awards”). Named one of Entertainment Weekly’s “100 Most Creative People in Entertainment,” Robinson is known for her work choreographing massive events including Super Bowl halftime, Grammy, and Oscars award show performances as well as directing multiple award-winning music videos with artists such as Rihanna, Kanye West, and Mary J. Blige. Robinson also worked directly with Whitney on several occasions, including on the music videos for “I’m Every Woman,” “My Name’s Not Susan” and more.

“Whitney was a musical trailblazer and I’m extremely honored to have this opportunity to help craft this show in her honor,” said Robinson. “I always enjoyed watching this magnificent woman and voice on stage and to be able to play a role in recreating that and helping others have those same emotions and experience is special.”

The only artist to chart seven consecutive #1 Billboard Hot 100 hits, the first female artist to enter the Billboard 200 Album Charts at #1 and the only artist with eight consecutive multi-platinum albums, Whitney Houston redefined what it meant to be an iconic superstar. Certified by The Guinness World Records as “The Most Awarded Female Artist of All Time” with more than 400 awards, including six Grammys, 22 American Music Awards, 16 Billboard Music Awards, two Emmy nominations and one win, Houston also had success on the big screen with starring roles in The Bodyguard, Waiting To Exhale and The Preacher’s Wife.

About BASE Hologram
BASE Hologram is the world’s leading producer of touring and residency productions which combine holographic and augmented reality technology, cinematic special effects and live performers. Current productions include Callas In Concert, Roy Orbison In Dreams, Roy Orbison and Buddy Holly: The Rock ‘n’ Roll Dream Tour and An Evening with Whitney. For more information, please visit BASEHologram.com.

About GFour Productions
Proud producers of some of the world’s highest caliber shows, from Broadway to the West End. Current Broadway productions and investments include: TINA: THE TINA TURNER MUSICAL, THE BOOK OF MORMON, SIX THE MUSICAL opening in October 2021, and AMERICAN BUFFALO opening in April 2022 starring Sam Rockwell, Laurence Fishburne and Darren Criss. Current U.S. tours include THE PLAY THAT GOES WRONG (also re-opening Off-Broadway), and the Tony Award®-nominated FIDDLER ON THE ROOF. They are producers of the first U.K. tour of the award-winning West End production of DREAMGIRLS. Other highlights include winning the 2013 Tony Award® for their production of WHO’S AFRAID OF VIRGINIA WOOLF; co-financing the 5-time Tony Award® winner for Best Musical, MATILDA THE MUSICAL; producing 9 TO 5 THE MUSICAL with music and lyrics by Dolly Parton; and producing AMERICAN SON starring Kerry Washington, which was recently adapted for Netflix. They are currently Tony Award nominees for THE INHERITANCE and TINA: THE TINA TURNER MUSICAL. Their combined shows have been nominated for 123 Tony Awards®, winning 44 and 110 Drama Desk Awards, winning 56. Their smash hit MENOPAUSE THE MUSICAL®, now in its 20th year including 14 years as the longest-running musical in Las Vegas history. It can be seen nightly at Harrah’s Hotel and Casino on the Las Vegas strip as well as on tour in the U.S, Australia, Canada, Europe and New Zealand. Their newest play, MIDDLETOWN® by Dan Clancy has performed in Las Vegas, Chicago, Atlanta and will continue its national tour this year. For more information, visit GFourProductions.com.

About Harrah’s Las Vegas
Harrah’s Las Vegas is a welcoming resort where guests can break away from their daily routine in a playful atmosphere. The resort offers more than 2,500 renovated hotel rooms and suites with bold purple and blue hues that complement the cream-colored décor, dark wood accents and contemporary fixtures. Harrah’s Las Vegas features 87,000 square feet of casino space, a modern Race & Sports Book offering both live gaming and sports betting, and more than 25,000 square feet of meeting and convention space. Six restaurants encompass everything from PizzaCake by Buddy Valastro, to the chef-driven Fulton Street Food Hall, to the upscale setting of Ruth’s Chris Steak House, a romantic venue with breathtaking views of The Strip. Harrah’s outdoor bar, Carnaval Court, brings high energy to the Las Vegas Strip with live music and some of the world’s top flair bartenders who juggle and pour to perfection. A wide variety of entertainment options include AGT’s Tape Face, X Country, and Donny Osmond will bring his first solo-residency to Harrah’s beginning in August of 2021. Harrah’s Las Vegas is operated by a subsidiary of Caesars Entertainment, Inc. (NASDAQ: CZR). For more information, please visit harrahslasvegas.com or the Caesars Entertainment Las Vegas media room. Find Harrah’s Las Vegas on Facebook and follow on Twitter and Instagram. Must be 21 or older to gamble. Know When To Stop Before You Start.® If you or someone you know has a gambling problem, crisis counseling and referral services can be accessed by calling 1-800-522-4700 ©2021, Caesars License Company, LLC.